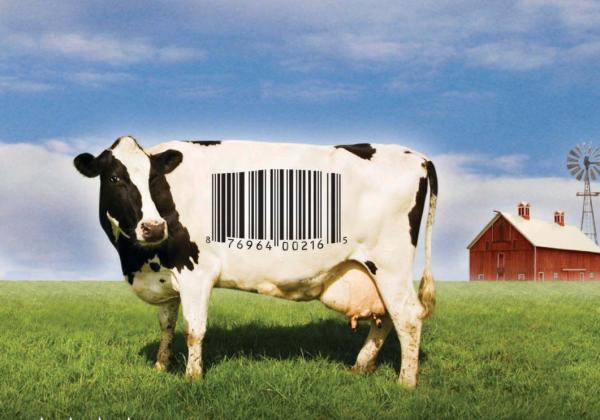 I spent the weekend watching documentaries. I found some of them very enlightening, if very depressing. Mostly, I found that the way we treat animals is just kind of really ridiculous and utterly horrifying, and I don't think I could ever eat a chicken again - not Tyson, not Purdue.I'm not really quite sure why they insist that these poor chickens stay in darkness, wallow in their own feces, and get kicked and beaten up by the men who pick them up for transportation to the slaughterhouses.

I was so distressed that I couldn't even eat my vegetable-based dinner that night.

And I'm not sure which was worse: seeing some guy reach into the hole planted in the side of the cow's stomach while he pulled out undigested materials, or the live pigs wrapped in iron fetters and laid out on the ground in rows! I will never eat pork again either.What happened to humanity? What happened to our food roaming free before we kill it and consume it?

I found the documentary Cooked' the least interesting of all of these - but then again, I am a raw foodie. Not just any raw foodie, I'm a raw foodie who has reversed many of her physical elements due to raw food. So to hear somebody say we were meant to only eat cooked food I find completely ridiculous and preposterous.But in Forks Over Knives' and Food Inc.', our inhumanity and the indifference to the plight of these animals by farmers should be outlawed. But then again, that's where money talks - and lobbyists speak the loudest. There will never be any kind of laws against this cruelty while lobbyists run Washington.

The fact that these companies put these farmers into hock so they can keep them under their thumb was torturous to watch, but immediately forgotten when seeing a baby chick being shoved into a machine and watching his little face scrunch up in shock - welcome to your world little chick!I don't know about you, but I'm tired of feeling helpless when I see this kind of horrible situation, and I can't even really imagine a Donald Trump or a Hillary Clinton fixing this. That's what's so sad about the state of our food, and that's what is so sad about the state of our country.

The intolerance that we have for each other and for helpless animals has ruined me. And I wonder where PETA is in all of this?

I know they throw paint on fur coats, which to me is an afterthought. What they should be really doing is going down to the farms and disrupting - opening the doors and letting the chickens out. Disrupt enough and Tyson and Purdue will have to change. Because this is not going to stop with the consumer but with the producers.PETA should be fighting for the pigs and the chickens and the cows. Not that we shouldn't eat them, but that we should treat them humanely before they become our sustenance.

I dare anyone to watch any one of these documentaries and not be completely disturbed.All three are on Netflix. This is really when I needed my show, A Healthy You.' This is where I would have been good and made some waves because I would've had visuals to show you.And these visuals will haunt you - they haunt me.

CAROL ALT is a pioneer and chameleon in the entertainment industry; constantly on the lookout for new challenges. Since her days as the world’s most renowned Supermodel, Carol has gone on to be multi-award winning actor, successful entrepreneur, best-selling author on Raw Food and Nutrition, and the host of A Healthy You & Carol Alt on FOX News Channel.
Previous How Important is Activity to Our Health? Next Your Health, Your Nails