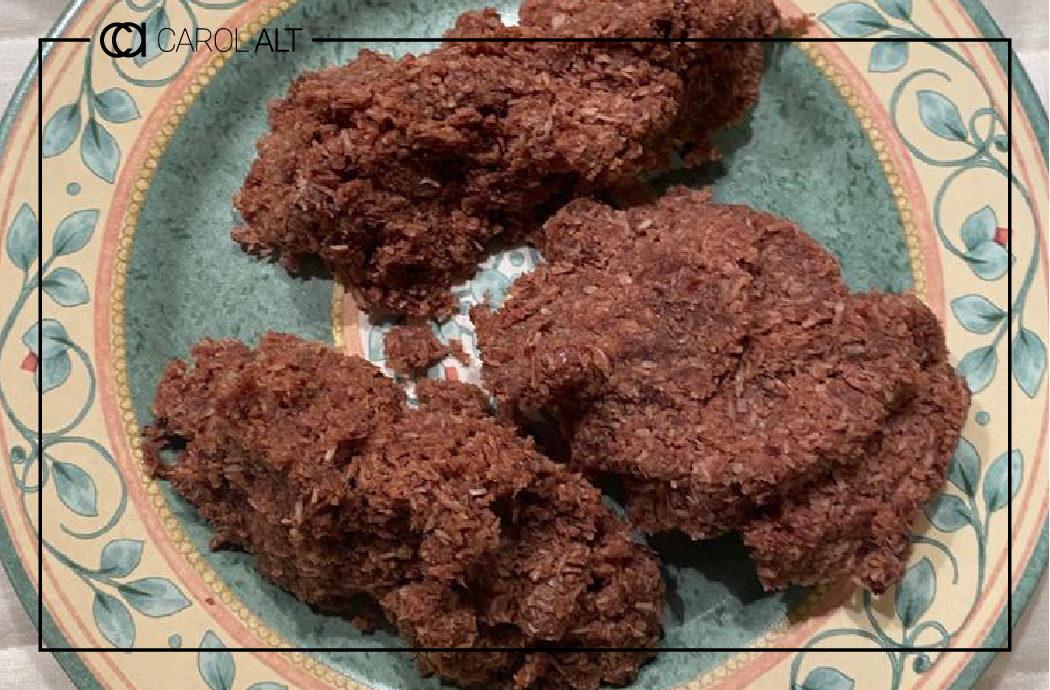 I worked in a bakery when I was a teenager. And if I had snacked on Ugly Brownies, I would not have put on those extra twenty pounds, which I had to get rid of when I started modeling!

Many people ask me how it is possible to have raw brownies. They wonder if I am talking about eating the batter. (Hate to ruin your day, but even common brownie batter is not raw, because some of the ingredients you use – like oil or butter – are already cooked before you get them.) Dehydrating does what backing does: dries out the batter so that it holds together and you can eat a brownie without it oozing through your fingers.

The difference between oven cooking and dehydrating is that dehydrating at low temperatures doesn’t alter the pH (acidity or alkalinity) of the food. Nor does it kill enzymes or denature the vitamins and minerals in the food. The trade-off is that it takes longer to prepare. But, hey, aren’y you worth it?

And after a salad, what’s better than a guilt-free brownie?

To open a young coconut: On the flat end of the coconut, make a 5-point star cut into the outer husk, then use the pronged end of a hammer to rip off the husk a piece at a time.

Once you are down to the inner brown shell, use the hammer and screwdriver to pierce one of the hard “eyes”. Next, poke the screwdriver into the soft eye, being careful not to spill the liquid inside.

Pour the liquid into a glass, then locate the two spines running lengthwise down the shell and use the hammer to crack the coconut in the prone area where there is no spine.

Use a spoon to pry off the broken shell pieces.

CAROL ALT is a pioneer and chameleon in the entertainment industry; constantly on the lookout for new challenges. Since her days as the world’s most renowned Supermodel, Carol has gone on to be multi-award winning actor, successful entrepreneur, best-selling author on Raw Food and Nutrition, and the host of A Healthy You & Carol Alt on FOX News Channel.
Previous Another epidemic? The sitting disease Next Why I turned down $100,000 to walk a runway