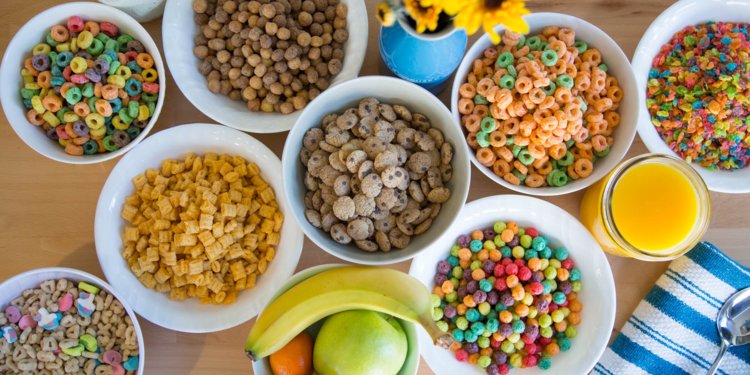 Sometimes it's really great when I talk about something and then I hear other people talk about it too. For example in his new book, "Groceries: The Buying and Selling of Food in America," Michael L. Ruhlman talks about breakfast. I've always said, "Eat breakfast like a king, lunch like a queen, dinner like a pauper." I say this because breakfast is the most important meal of the day.

However, the wrong breakfast can be deadly. In my book, "Easy Sexy Raw," I wrote that in 1914 we were eating eggs and bacon and homemade bread and pork chops with unpasteurized milk for breakfast; by 1917 we were eating cereal. What happened? Well, in a nutshell, we were sold a bill of goods - or should I say, a bill of not good. We were told a fast, quick, nutritious breakfast was to be found inside a little cardboard box.

But I think Michael says it very well, so I'll let him take it from here: we spend $650 billion a year on groceries, and grocery stores are a reflection of what our fears and concerns are. We are more concerned about our food than ever before because our food is making us sick. (Wow! What have I been saying for years - go Michael, go Michael, go Michael!)

Then he starts to talk about breakfast being the most dangerous meal of the day. He goes on to explain thatbreakfast cereals have added sugar. Even the cereals without added sugar are composed of refined wheat, which is carbohydrates and becomes sugar in your bloodstream - and we eat them on an empty stomach in the morning. Basically, we are eating nutritionally bankrupt foods.

The response from General Mills was that they fortify their cereals with vitamins and minerals and whole grains. Michael, obviously, correctly responded, "Why do we need to fortify our cereals with anything? It's because we take everything good out of them in the first place." He says foods with words like "stronger" or "fortified" on the package should be avoided.

Then he went on to talk about a woman in the grocery store ahead of him in line buying fat-free Half-and-Half. He said she obviously looked like an intelligent woman, and he wondered why she was buying fat-free half-and-half when by its definition half-and-half is milk that already has half the fat. She said she wanted less fat. He then asked her, "What do you think they're putting in instead of fat?" She then, rightly so, picked up the product and read the label. Listed ingredients were skim milk and corn syrup! So they took out something that was basically good - dairy fat - and added something that they know is NOT good for you, which is corn syrup.They then called it Reduced Fat Half-and-Half. Sounds like an oxymoron to me!

Again, read the labels. If you can INDIVIDUALLY BUY every ingredient on the label in the grocery store, then it's real food. (Hmm, that sounds like a pretty good tip to me!!) Also, if it tells you on the package that it's food - it probably isn't! I mean, come on, if they have to keep driving home the point, I think that they're trying to convince you about something that isn't…Again, take the time to read the ingredients. Read how much sugar there is, read the portion size: if the portion size is 25g of sugar and a surveyed "portion" is 50g, that means it's half sugar.

So what do you eat for breakfast? There's so much that you can eat that's not sugar. (Notice that I said, "not sugar!" That means fruit is not a good morning breakfast. It's just more sugar of another kind.) I personally have an egg every morning with some raw cheese. I have sometimes soaked whole raw grains like oat groats mixed with Kiefer. I also have raw bars when I'm in a rush. (And yes, everything can be found on the internet. We live in an age where you can get anything you want. So get used to it - you can't use the excuse you don't know where to find it.)

CAROL ALT is a pioneer and chameleon in the entertainment industry; constantly on the lookout for new challenges. Since her days as the worldâ€™s most renowned Supermodel, Carol has gone on to be multi-award winning actor, successful entrepreneur, best-selling author on Raw Food and Nutrition, and the host of A Healthy You & Carol Alt on FOX News Channel.
Previous Sister Hero Next This Is Joey