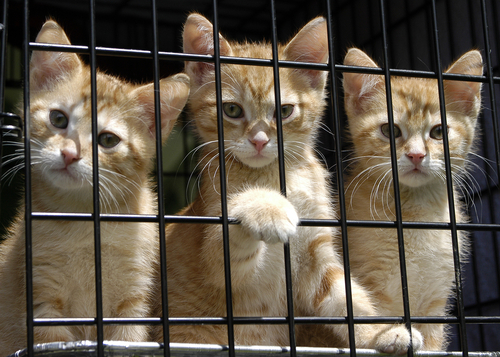 But this blog is not about Joey.

Two years ago I adopted my little rescue kitty from North Shore Animal Shelter. His name is Sammy. Lo and behold as the days unfolded, Sammy was a little bored. I would go out, I would come in, but Sammy sat all alone. Food and shelter aside, Sammy missed companionship. One day I got a call from a neighbor who said that her cousin runs a shelter: the shelter was called Shelter Chic.

Shelter Chic had a little black kitty who had been there for five months. The reason they were reaching out to me is due to the fact that they knew I liked black cats - hence Sammy. I was sent a picture of the little kitty, who is now my little kitty named Joey. You could see she was brutalized by someone as her eye was distorted. My heart broke.I had to adopt her. Sammy now has a little friend and Joey has a forever home! Goodness all around...

But this blog is not about Sammy...

Brittany is the owner of Shelter Chic, the shelter where I adopted Joey. The more I knew about Brittany, the more I wanted to help her and get involved. Britney is one of those once-in-a-lifetime people. Totally, completely, and absolutely selfless. She lives to help others. Her main job, when she's not helping animals, is working with disabled children. Her "sideline" is finding animals in great distress and saving their lives. She pulls animals that are on death row in the New York City Pound; she finds kittens in shopping malls; she finds family animals who have become sick and whose owners can't take care of them anymore, so they dump them in favor of a new little puppy or kitten. She adopts them and helps them.

She finds starving, brutalized, and traumatized animals and save them. Every dollar she raises goes towards that. Not one dollar goes in her pocket; what other charity can say that? She has a deal with a veterinary service who helps her with her more injured cats or dogs. However, this is still extremely costly. But she manages - as many animals as she can, as many as her funds will allow. She also fosters out those animals until she can get them adopted. In case you're interested, her adoption rate is 100%.

I really had not known anybody like Britney. In the self-centered life of fashionistas, Britney stands out as an example to us all. Yet as in awe of her commitment as I am, and as much as I love animals, and as "in the know" about how necessary people like Brittany are - I could not do what she does. Listening to her stories makes me cry. Any animals she saves and ultimately loses because they are too injured or too hurt makes her cry. But she gets up each and every morning and does it all over again.

The many saved animals and happy stories are what keeps her going. It's Joey's happy ending that makes me want to help her. It takes a strong woman to do this. It would be great if she had some strong backing. To show Brittany that she is not alone, please donate! Even a dollar helps.

CAROL ALT is a pioneer and chameleon in the entertainment industry; constantly on the lookout for new challenges. Since her days as the world’s most renowned Supermodel, Carol has gone on to be multi-award winning actor, successful entrepreneur, best-selling author on Raw Food and Nutrition, and the host of A Healthy You & Carol Alt on FOX News Channel.
Previous Breakfast Cereals Next One Minute Workouts