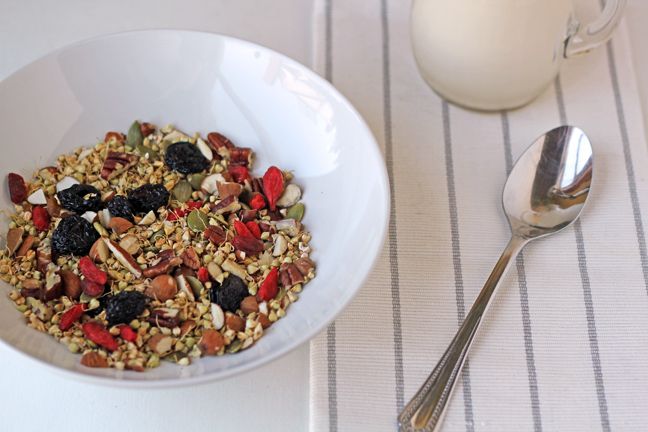 Often called buckwheaties in the raw world, this breakfast cereal takes a bit of advance planning - it involves soaking, sprouting, and dehydrating. But don't let that scare you away - it only requires one ingredient! And it keeps for a few weeks, so you can double or triple the recipe - fill up all the trays of your dehydrator - and have it on hand whenever you get the urge for something a little crunchy.

Make sure you use hulled raw buckwheat groats, which are a whitish green to light brown color, and not kasha. A little darker in color, kasha is toasted, which means it won't sprout.

A note on soaking: Buckwheat groats release a large amount of starch when they are soaked, so make sure to rinse the buckwheat well both before and after soaking to remove some of the starch. You won't be able to remove it all, but that's fine.

Spread out the sprouted buckwheat on ParaFlexx-lined dehydrator trays. Place in the dehydrator, set it for 115 F, and dehydrate for 10 to 12 hours, until crisp. Serve with your choice of milk, fruit, and/or sweetener.

Store in an airtight container for up to 3 weeks.

Good news for those who are avoiding wheat: Despite its misleading name, buckwheat has no relation to wheat and is completely gluten-free.

CAROL ALT is a pioneer and chameleon in the entertainment industry; constantly on the lookout for new challenges. Since her days as the world’s most renowned Supermodel, Carol has gone on to be multi-award winning actor, successful entrepreneur, best-selling author on Raw Food and Nutrition, and the host of A Healthy You & Carol Alt on FOX News Channel.
Previous Lucuma Smoothie Next Cumin-Corn-Cacao Crackers